Sign up Carrboro!
News & Updates
By Email or Text 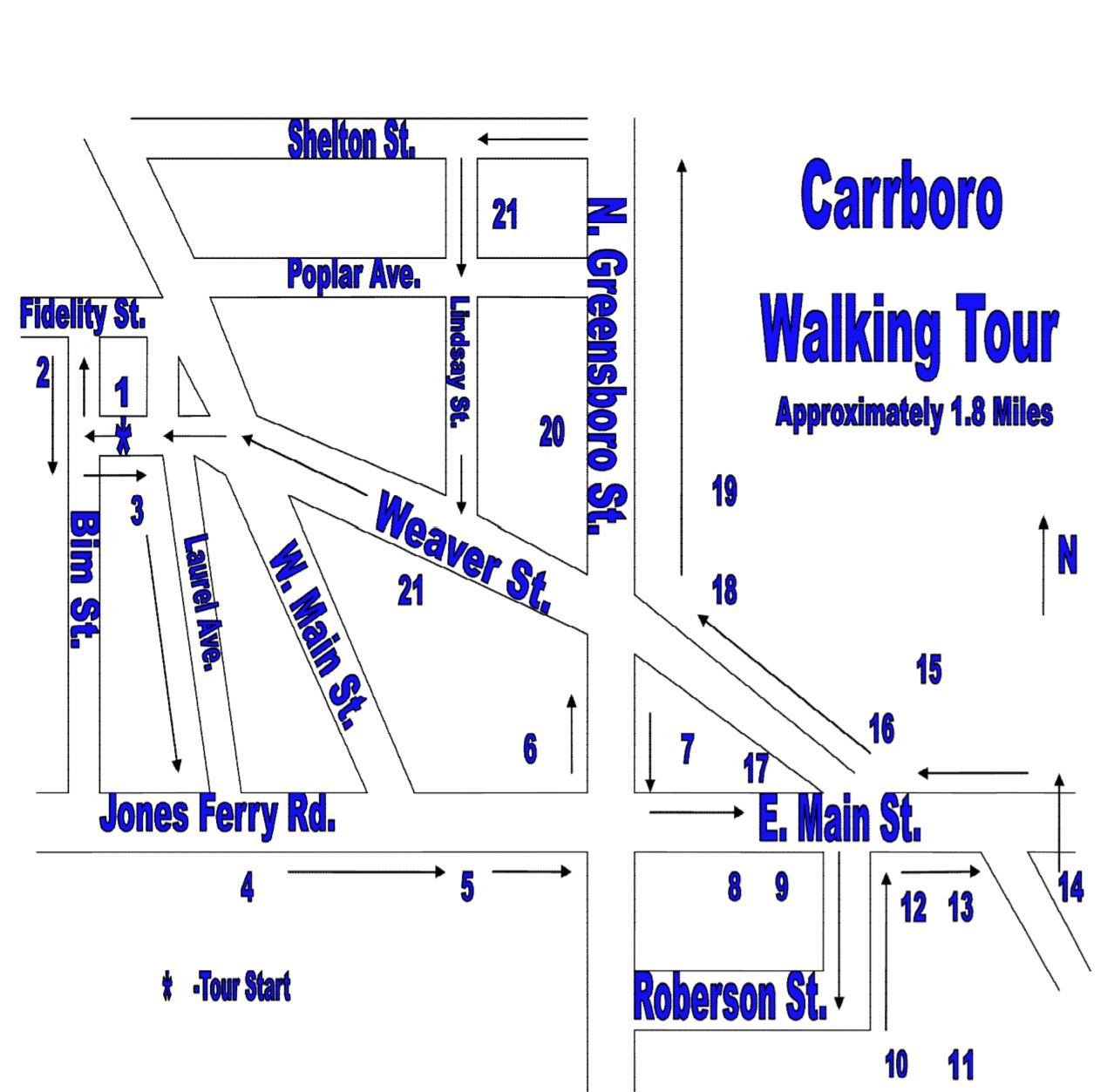 1. Carrboro Town Hall - Originally built as a public school (1922-1959), Town Hall houses many of Carrboro’s administrative offices including the Mayor’s office. The Town's first Truth Plaque was installed outside the front doors on April 16, 2019. The Truth Plaques are an attempt to acknowledge our history as part of the process of changing and transforming the Town's narrative and dedicating ourselves to a future of racial equality and justice.

6. Roy S. Lloyd Building/Cliff’s Meat Market - Located at 100 and 102 W. Main Street, this building was constructed by the Lloyd family around 1950 and housed the family’s electrical business on the first floor while the family themselves lived on the second floor. In 1973, Cliff’s Meat Market opened for business.

8. East Main Street - This stretch of Main St. was Carrboro’s original business district. Once wooden buildings, a fire destroyed the buildings, and the brick buildings that you see today were constructed in the 1920s. These buildings were once home to such businesses as the Melba Movie Theater, Lloyd-Ray Hardware Store and Merritt Drug Store.

10. Libba Cotten Memorial Bike Path - This bike path that connects Carrboro and Chapel Hill is named after one of Carrboro’s most famous citizens. Libba Cotten gained fame from her song “Freight Train” which was recently added to the US Library of Congress. Cotten won a Grammy in 1984 for a live album she recorded. Cotton, an African-American, was born in 1895, and taught herself how to play guitar. She played in an unusual style with a left handed guitar turned upside down. Cotten wrote “Freight Train” when she was 12 years old.

11. Old Carrboro Cemetery - The land for this cemetery was donated to the town by Dr. Foy Robertson. The cemetery has been in use since the early 1910s, with the oldest marked stone being at 1915. There are several unmarked stones that may date back further. This is Carrboro’s oldest cemetery.

12. Cat’s Cradle - This famed local music venue has been host to some of music’s most famous artists. Acts such as REM, Pearl Jam, and Nirvana have graced the stage of one of Carrboro’s most famous attractions.

13. The ArtsCenter - A community gathering place that nurtures creativity and community through art, education, performance, and exhibition. The ArtsCenter is a place where local artists can show off many of their newest creations, and allows visitors a deeper understanding of Carrboro.

14. Main Street Gallery - Currently, an art gallery featuring antique pottery, antique and modern art, and a monthly art display. Many people do not know that this was home to the Hollywood Theatre, the famed black-only theater of the mid 1940s and 50s. The Hollywood featured Friday, Saturday, and Sunday shows with a .10 admission.

15. Lloyd Gristmill - The original building on this site was erected in the 1880’s, but was destroyed by fire in 1916. The building was rebuilt shortly after and is still standing today. The building was originally a gristmill and cotton gin, and has been the site of many businesses since.

16. Carrboro Railroad Station - This railroad station was the impetus for Carrboro’s creation. Originally called “West Of” because of its’ proximity to Chapel Hill, settlements around the railroad station eventually led to the formation of Carrboro. The station was built in 1913. It is also the former home of the Southern Rail restaurant.

17. The Flatiron Building - This unique triangular building was modeled after the famous “Flatiron Building” in New York City. It was originally built in the 1920s and has housed many businesses, and was once home to the US Post Office.

18. Weaver Street Market - Known as “Carrboro’s Front Yard”, Weaver St. Market is a community cooperative of locally grown organic produce and products. The lawn in front of the market is a gathering place for citizens, and hosts many events from craft fairs to concerts.

19. Carr Mill Mall - Originally called Alberta Cotton Mill, this building was built by Thomas Lloyd in 1898. This brought jobs and people to the area and spurred the growth of Carrboro. The mill was bought by Julian Carr, Carrboro’s namesake, in 1909. By the 1970s, the building was vacant and slated for demolition, but was saved by the local citizens as a historical landmark. After an $8.5 million renovation, the building became Carr Mill Mall, home to many retail stores, offices, and restaurants.

20. Fitch Lumber Company - This business was founded in 1898 and opened in Carrboro in 1923. The railroad and the mill allowed Fitch Lumber to thrive and is one of Carrboro’s original and longest-lasting businesses.

21. Poplar Avenue/Lindsey Street/Weaver Street - These streets encompass much of Carrboro’s original residential district. These typical mill houses are good examples of the architectural style of the 1920s and 1930s.